What to do in the area

Laigueglia is a small seaside village, similar to many towns in Liguria, surrounded by the municipalities of Alassio and Andora and the Ligurian sea. It extends on the coast of the Western Ligurian Riviera, near the Baia del Sole, bounded between Capo Santa Croce and Capo Mele.

For several years it has been recognised among the Most Beautiful Villages in Italy , with its alleyways, small squares by the sea, the pink-lilac tones of the houses in the protective shadow of the monumental church of San Matteo, Laigueglia retains the charm of an old fishing village that most of the Ligurian coastal towns have lost.
From the beach, which in winter is filled with colourful boats and nets, and even more from the pier, you can notice the particular amphitheatre-like shape of the town, which is the only one that has not altered the shape of the buildings, keeping their volumes and heights.  The ancient heart has remained, continues to pulsate in its squares, its alleys, its colours, in the Saracen tower of 1564, so called because it was part of the positions of defence against pirate invasions (it is the only one left of the three originals).  Laigueglia is not rich in great works of art, besides the parish church, but invites you to look for the expressions, even minor, of local creativity, all focused on the relationship with the sea.  Wherever you look, you cannot escape the two bell towers of the church of San Matteo, surmounted by coloured majolica domes.  The two crosses that stand on top of the bell towers follow the directions of the Mistral and Libeccio. 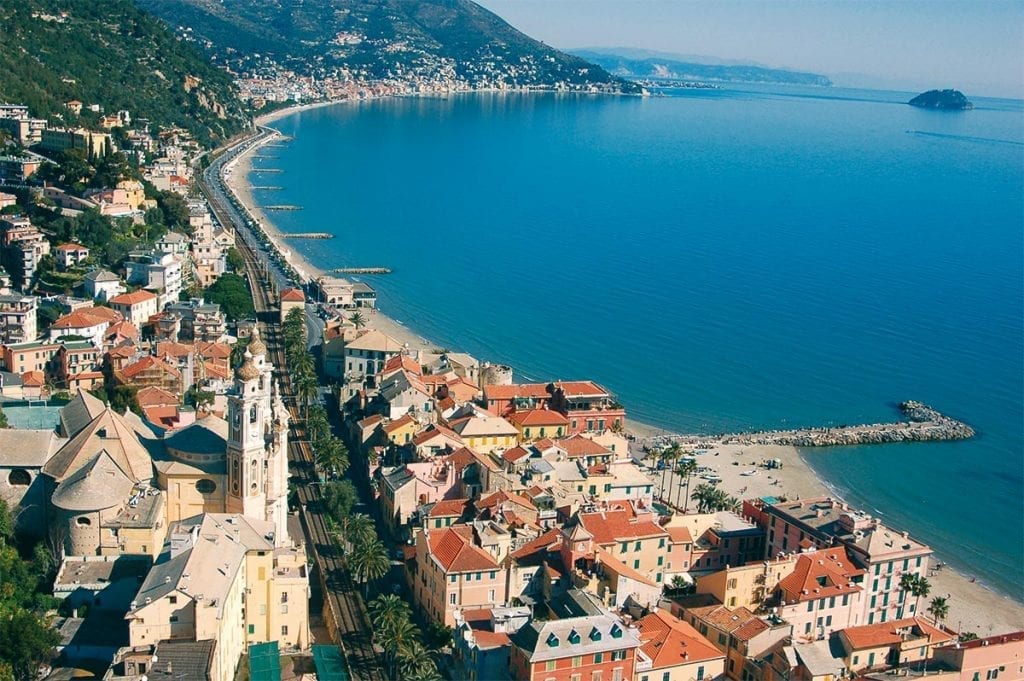 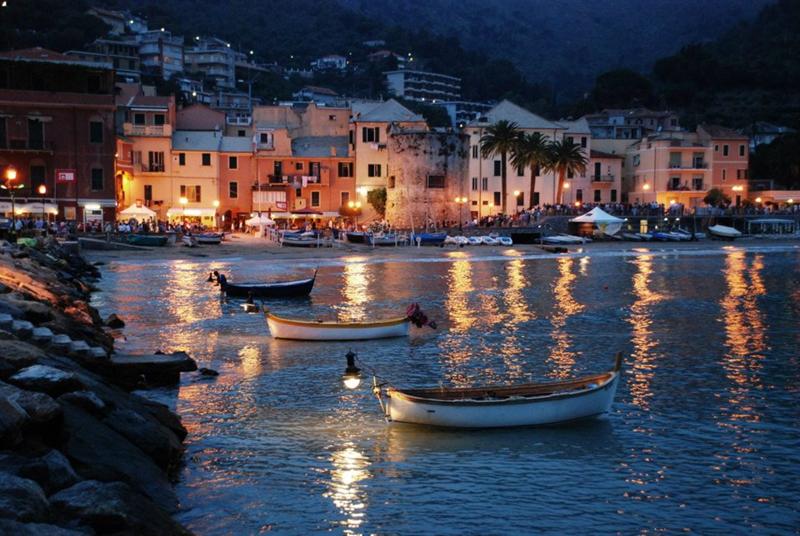 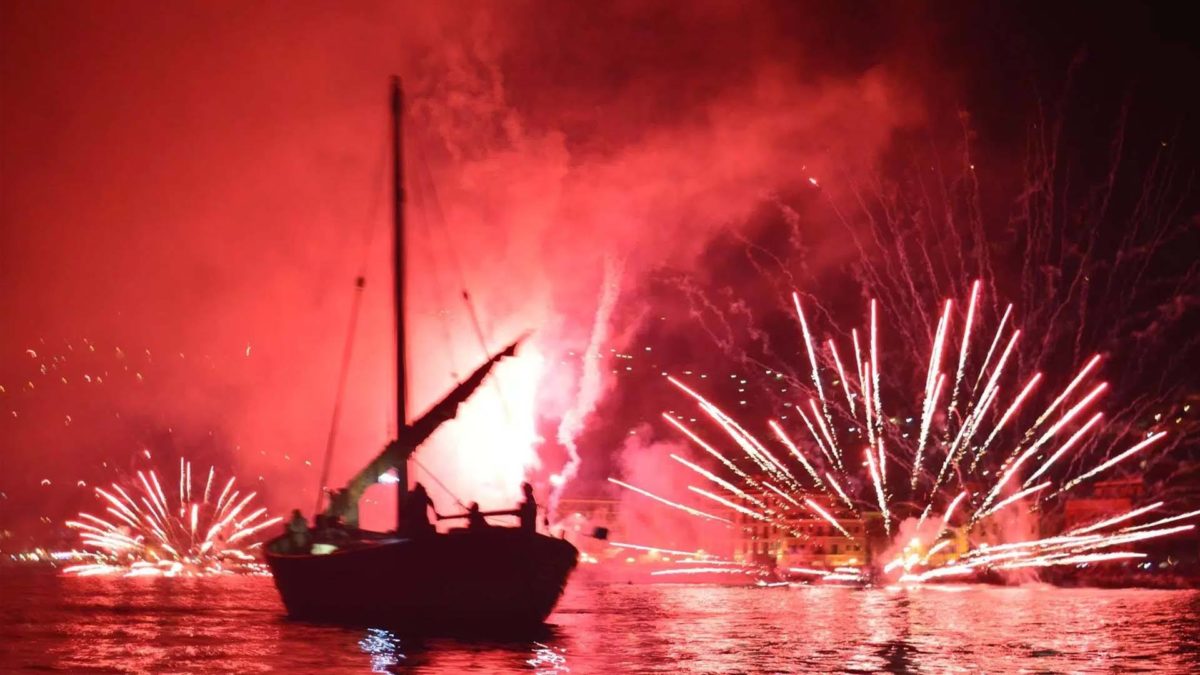 Laigueglia is located in a position where it is easy to reach the most interesting destinations of Liguria:

The area of Laigueglia and the immediate surroundings are ideal for those who want to play sports. Those who love tennis will find the tennis courts at Punta Taquara. At the Country Club Circolo Ippico of Garlenda you have the opportunity to go horseback riding. Golf has its reign at the Garlenda Club, an 18-hole course surrounded by greenery. Sailing, canoeing, windsurfing, motor boating, off-shore and fishing are the sports you can practice thanks to the facilities and the wonderful sea of Laigueglia . In short, everything for all those who feel sporty even on vacation.

Canoe start courses, Hydrospeed and accompanied excursions at sea in the suggestive Baia del Sole, within the Pelagos Cetacean Sanctuary International Marine Park. For those who love free water and intend to experience it even without playing a sport. 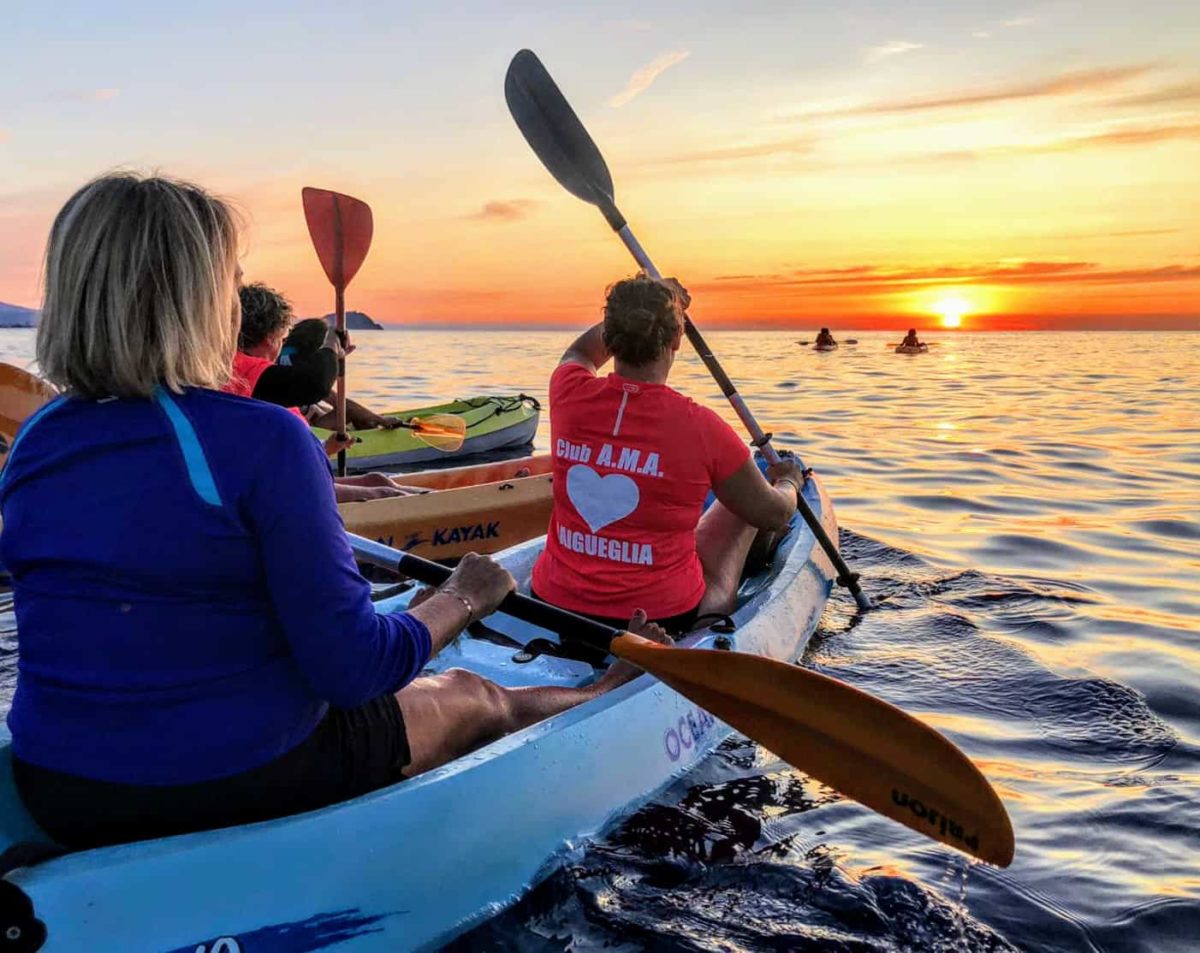 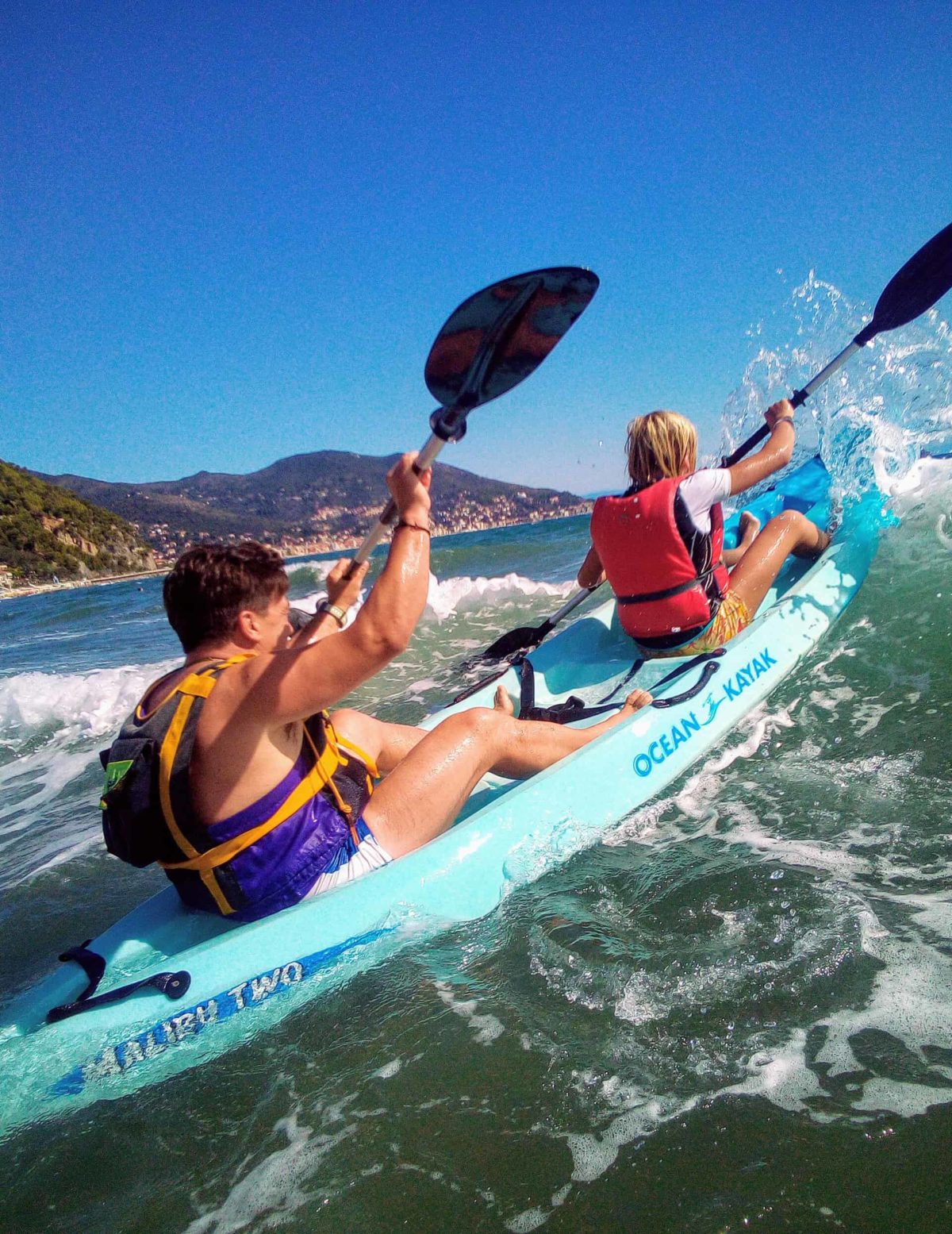 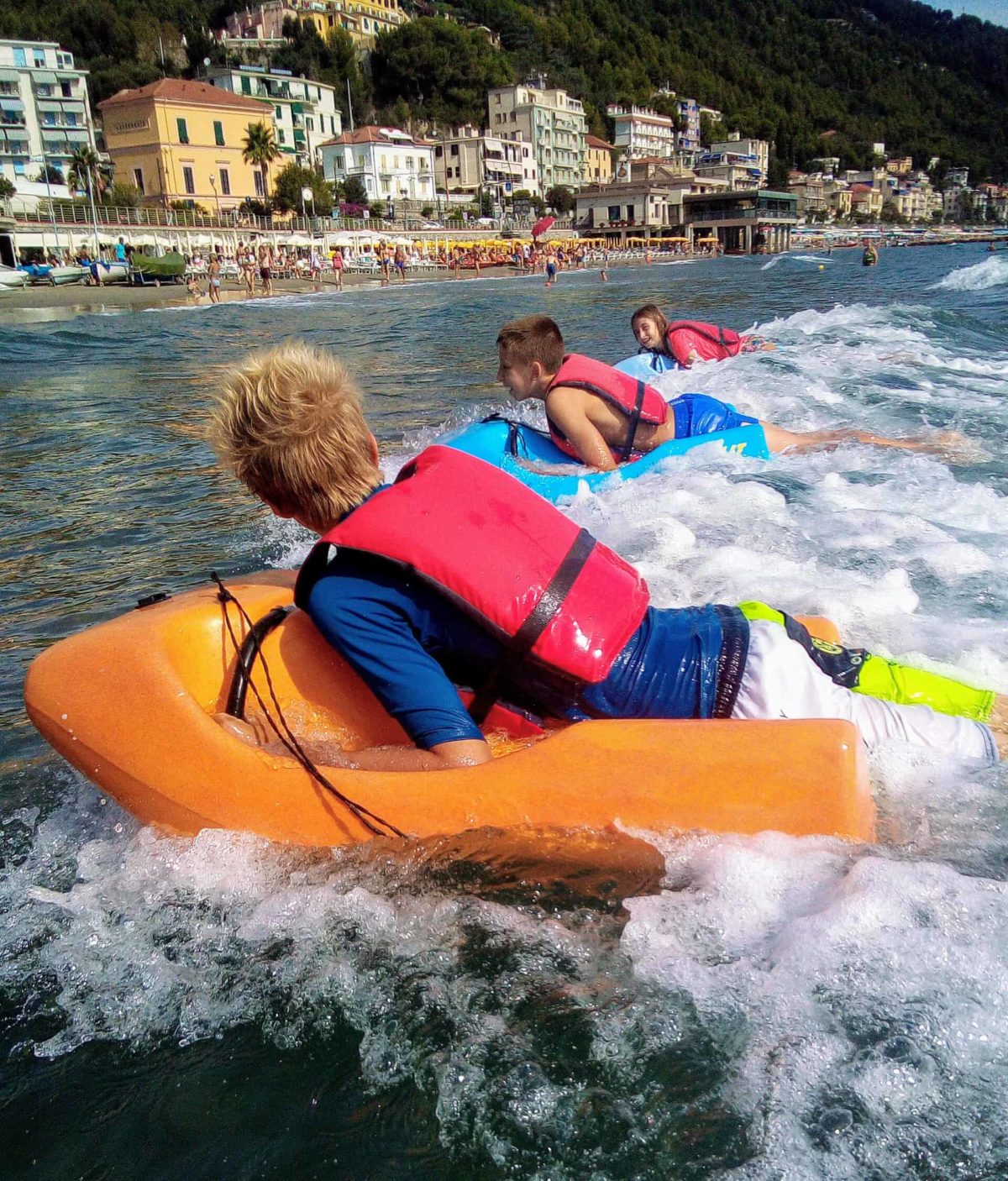 Trekking in Liguria: A journey into nature

Breath-taking landscapes, mountains overlooking the sea, ancient routes, traditions and legends, medieval woods and villages, a sense of peace and well-being, islands and promontories. Here discovery and wonder will be part of your itinerary. 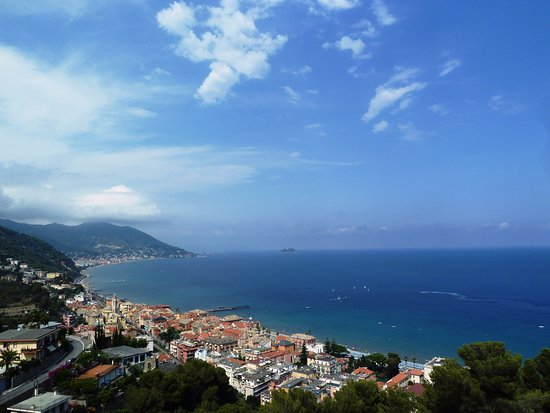 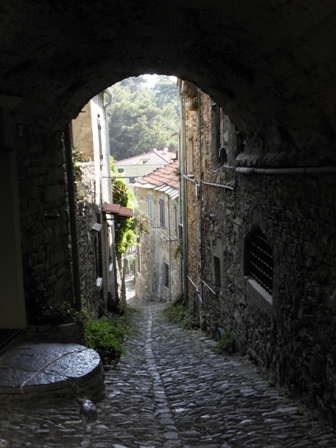 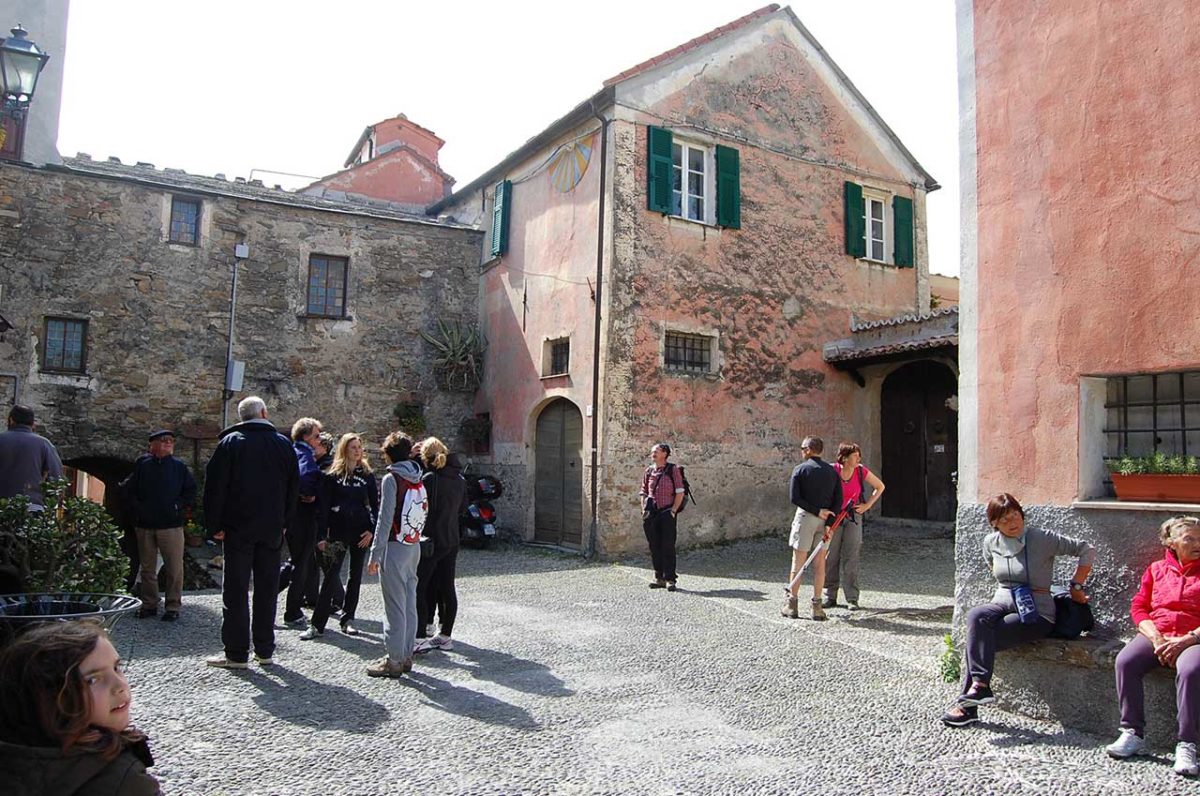 The routes on the hills are suggestive, for those who prefer the mountain bike, from the simple stroll between beech and pine forests to the steep climb for the more adventurous ones.

In the area of Finale there is even a specific style, which is practiced in narrow passages in the middle of the rocks overlooking the sea.

Numerous organised groups, distributed throughout the territory, allow you to have specific information on the paths and excursions, and to rent  road bikes,  mountain bikes  and e-bike on the spot.

Following in the footsteps of the professionals, even amateur cyclists can find the ideal environment for long rides on these roads, accompanied by the colours of the sea and the scents of the beautiful nature of the hinterland. 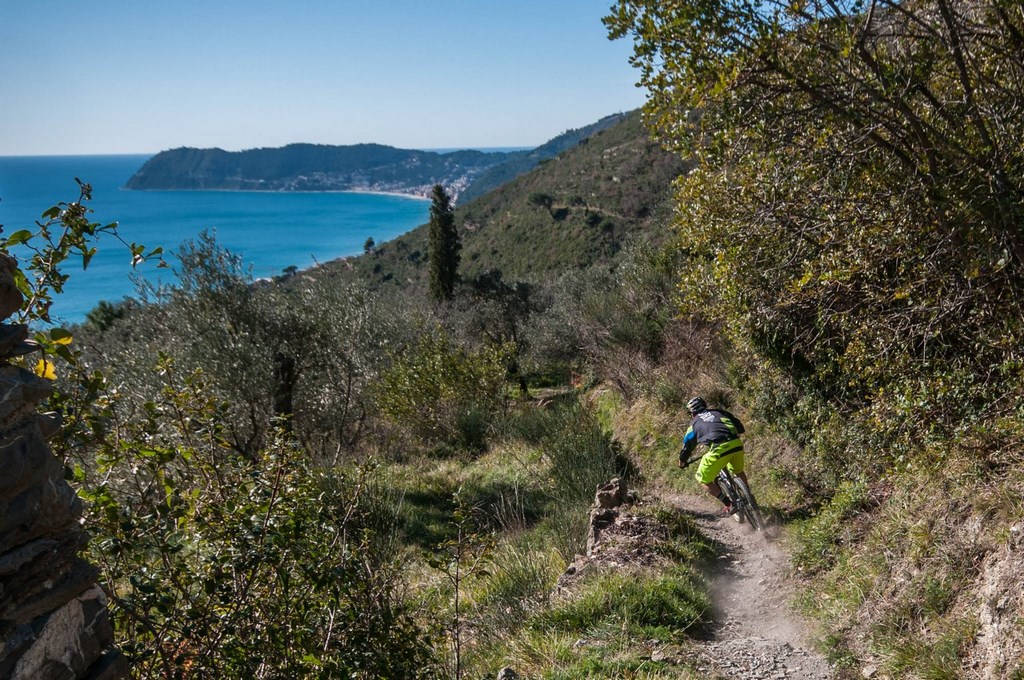 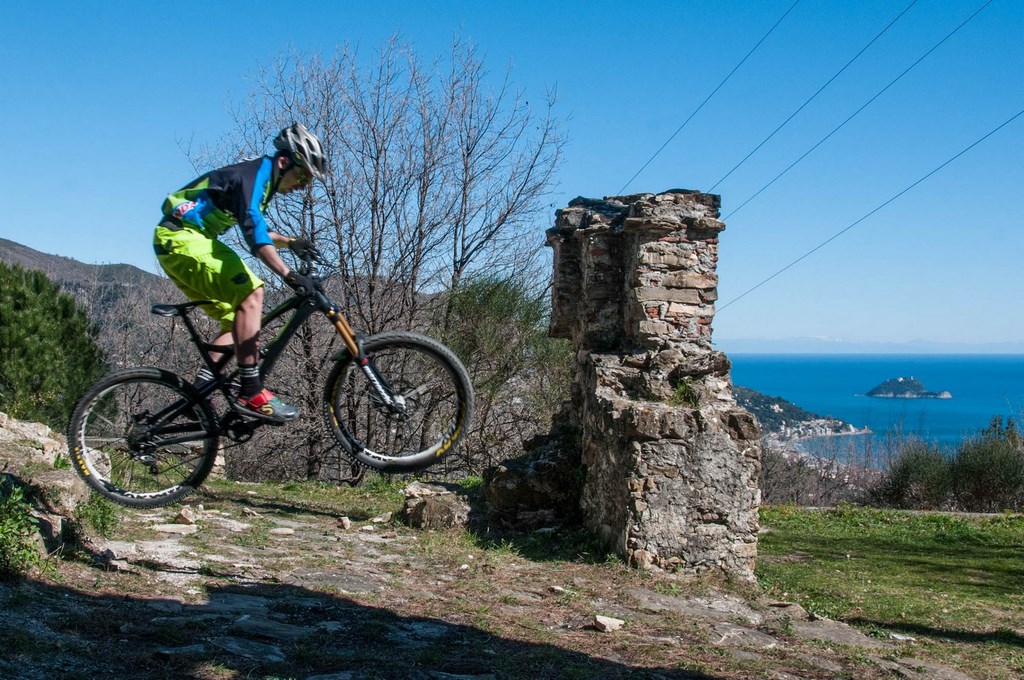 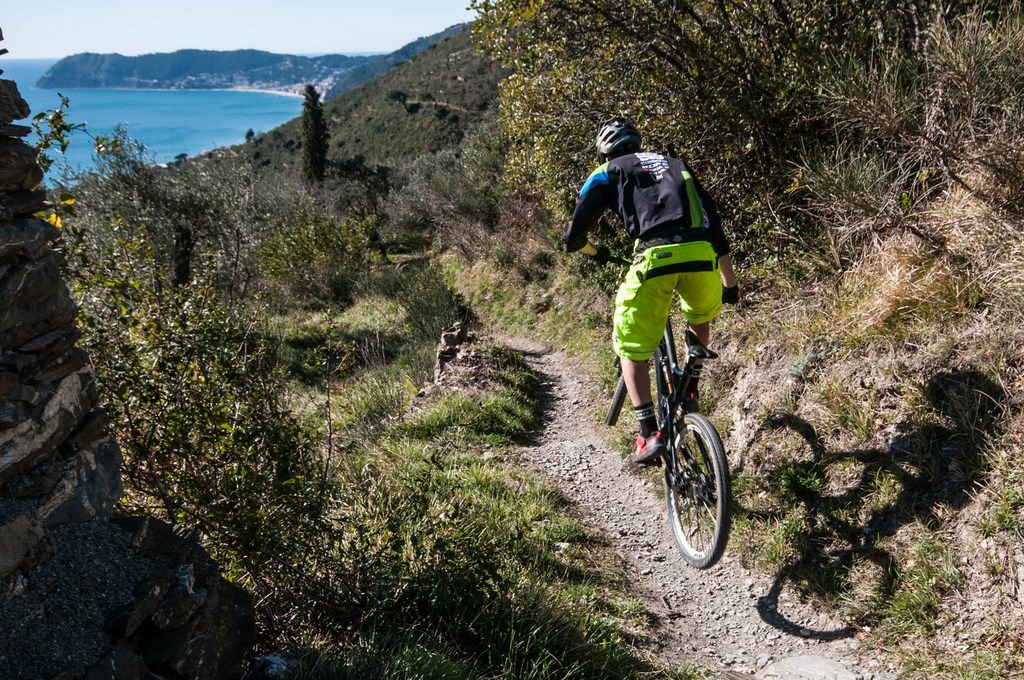 The Laigueglia Trophy is a men’s line road cycling race, which takes place around Laigueglia in Liguria every year in February. It is part of the UCI Europe Tour circuit, class 1.HC

The path, very bumpy even if it does not have climbs of significant length or slope, often sees its key point in climbing the Ginestro Pass.

The biggest names in cycling of the twentieth century are written in the roll of honour, from Saronni to Merckx, from Gimondi to Moser. A race that represents a great opportunity to promote the area: the competition takes place between some of the most beautiful villages in the western Liguria and Laigueglia itself is part of the circuit of the most beautiful villages in Italy. 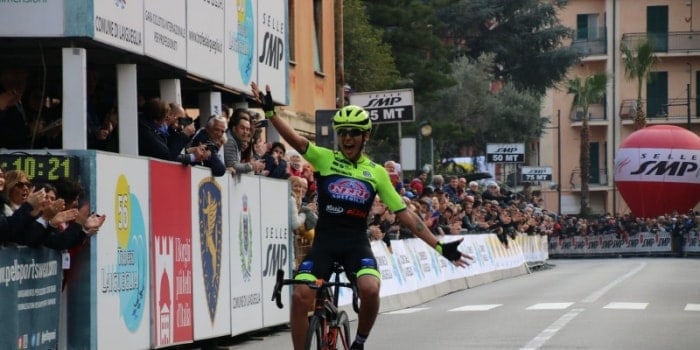 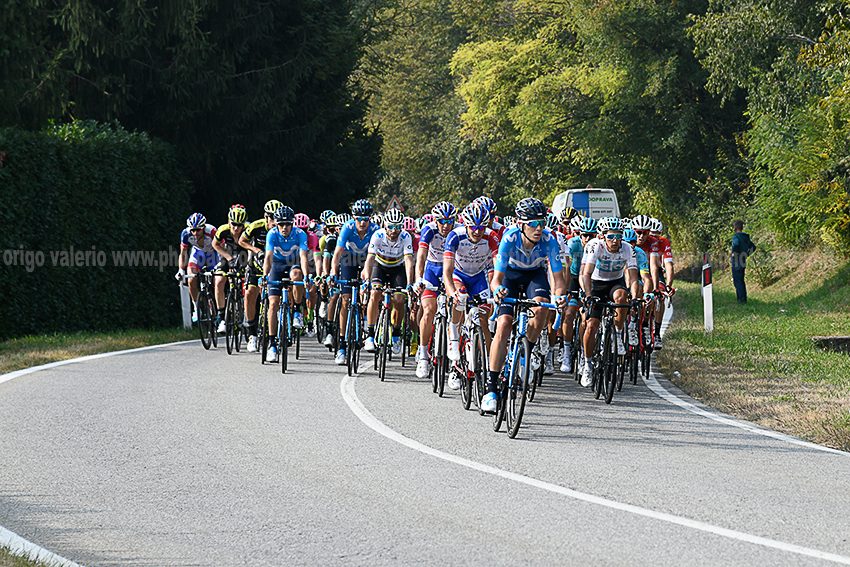 The Garlenda Golf Club is located in the Lerrone Valley, one of the most suggestive and picturesque in the Ligurian hinterland and is surrounded by ancient olive groves and pine forests.

With a development of 6085 metres and a par of 72, the 18-hole course is a difficult test for the most gifted players, and it is a pleasant commitment for golfers with higher handicaps with normal starts. Over the years the Club has always improved the technical level and is perfectly practicable in every season.

From the highest holes you can enjoy a wonderful panorama that ranges from the sea to the Maritime Alps. The 18 holes of the course, opened in 1965, were designed by the architects Morrison and Harris and fit admirably into the local landscape without altering its environmental characteristics. Furthermore, in recent years, the route has undergone some changes that have improved its technical characteristics.

When we talk about the Ligurian Riviera, we immediately think of the coast, its beaches, its rocks overlooking the sea and its crystal-clear water. Next to all this, or better under all this, we find the underwater landscape of the seabed, still the heritage of few lovers of scuba diving.

Polychrome shades hide a silent and teeming life both a few metres from the coast and offshore, where we often encounter shallows easily accessible by self-contained breathing apparatus. Both for those who prefer the exploration of fish fauna and for lovers of wrecks and archaeological finds, the seabed will leave you spoiled for choice.

The marine parks, that of the islands of Bergeggi and Gallinara and that of Loano allow diving in absolutely protected and uncontaminated environments. The waters of the Riviera therefore lend themselves to any type of underwater activity: from apnoea diving to fishing or just for the simple observation of the seabed, up to the descent with cylinders for the study of marine flora and fauna. 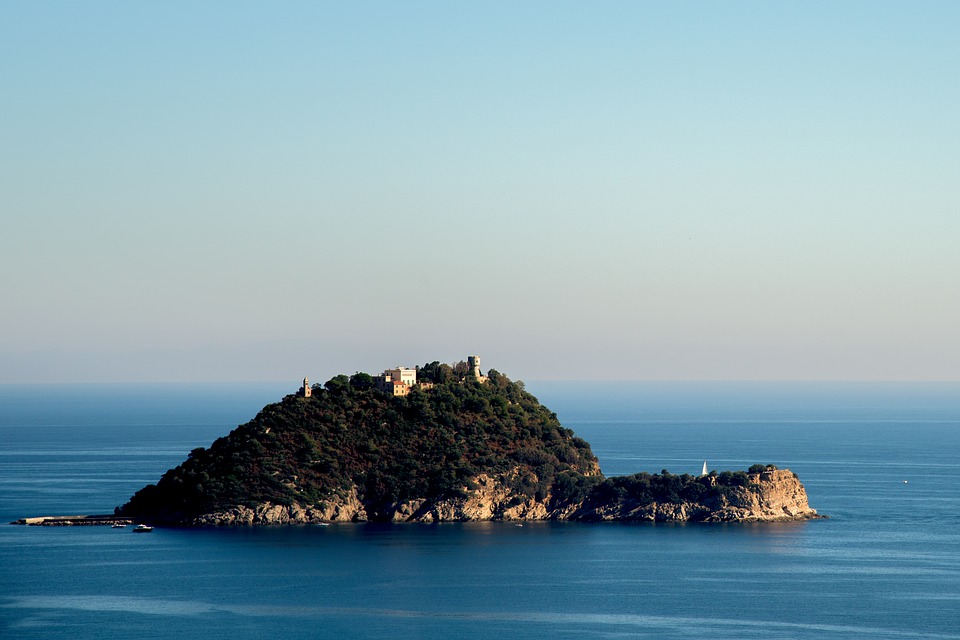 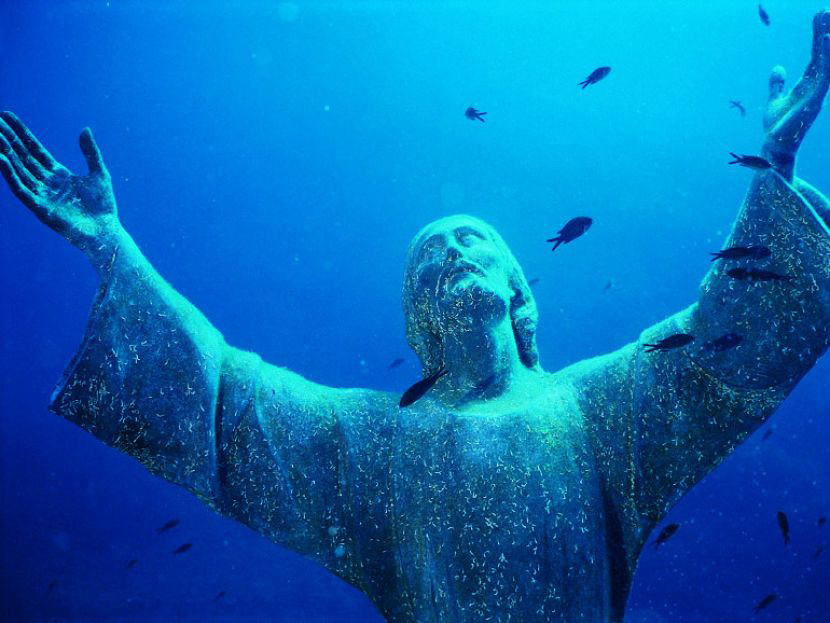 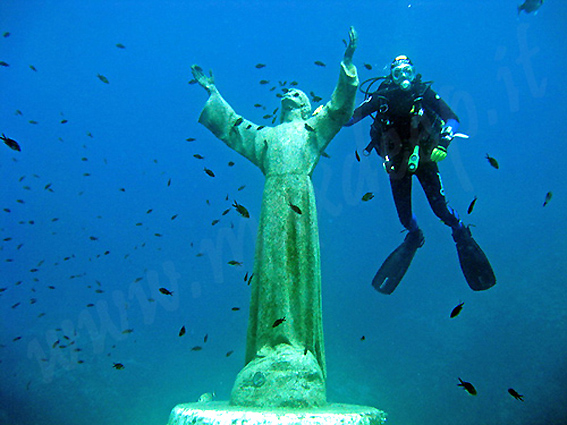 The only racecourse in the whole Liguria region, it is positioned between Villanova d’Albenga airport and Garlenda golf course, immersed in a green area, about 2 km from Alassio.

The structure was opened in 1991 and since then it can count on a loyal audience that has created locally, but also on passionate tourists who continue to follow their favourite hobby during the holidays.

Following the race is truly exciting both for the general excitement during the race and for the moments of exaltation at the arrival of the horses. The drivers are all high-level professionals and the horses, splendid and well-kept animals, represent a show in themselves.

Consult the page of the sports offers  to discover our sports packages and choose the one that best suits your needs.